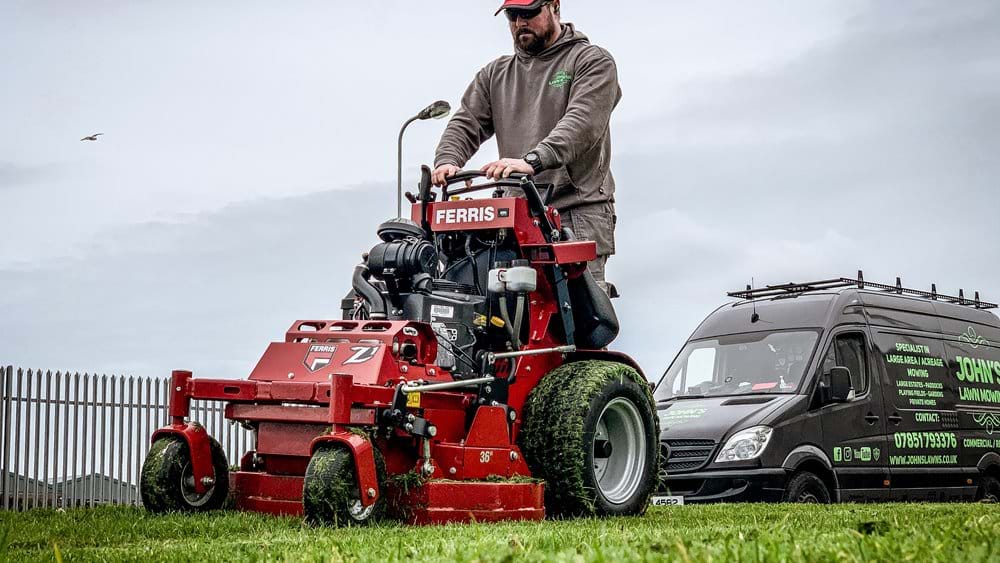 Kawasaki’s engine build quality has been cited as one of the contributing factors to Lawn Care Legend John Ryan’s self-employed business success. Along with its power, durability, reliability and performance.

John has been a lawn care contractor at his company, John’s Lawn Mowing Services in Bangor Northern Ireland for 23 years, he’s also the founder of one of the fastest growing social media groups in the lawn care industry, so it wouldn’t be a stretch to claim that what he doesn’t know about lawn care isn’t worth knowing.

Working as a solo operator delivering high quality, reliable and affordable grass cutting, John has learned along the way the value of having the right machinery for the job. He says: “It’s easy to think you need the job first then the machine, but the truth is you need to reverse that thinking. I’ve been there with the wrong machinery and all it delivered was headache after headache, lots of stopping and starting and unnecessary wear and tear on the machine.

“I started taking my influence from successful businesses around me and Kawasaki came up time and again for its reliability and productivity. I learnt that when you have a small team, having efficient machinery is like having another couple of people. It’s the best investment you’ll make for your business and if you compromise on quality, you compromise on profitability and success.”

So, what makes machines powered by Kawasaki such a safe bet? Lots of reasons, but significantly the quality of their engineering, raw materials and components. The FJ180V KAI and FX Series engines all feature metal engine covers, for example, to protect them throughout a life of heavy commercial use and repeated transport from job to job. Both also use dual-stage, high particle capture air filters, for a cleaner air intake, vital for combustion efficiency and engine performance. Cast iron is chosen to line the engine cylinders - a material highly resistant to the wear, temperature and pressure inside the engine cylinder. Added to that, everyone who assembles a Kawasaki engine also rigorously inspects it, and every finished engine, not just a sample, is test-run before being sold - a major contributory factor to Kawasaki's reliability, durability and consistency.

John says about these choices: “Kawasaki is a name that speaks for itself and my machines have never let me down. As we all know if you’re not cutting, you’re not earning, so downtime has always been a deciding factor in my machinery choices. With these machines, downtime is absolutely minimal and I can get a lot done in a lot less time.”

It’s not just the machinery to which John attributes to his success, it’s the support of a good dealer too. He says: “Dealers are the backbone of the industry and a decent one will pull out all the stops to help you. As a commercial contractor and it being just me, that’s been something I’ve relied on in my career and it’s played a big part in the success of the business. Not having that support can result in a knock-on effect to your schedule and can set you back, delaying other jobs.”

Alongside build quality, power, performance and reliability, John says the ergonomics and aesthetics of the machine is important too: “The Kawasaki name speaks for itself. When you turn up to a job with machines powered by Kawasaki, it instils confidence in customers and represents the sign of a professional outfit.”

And all these factors have certainly proved effective for John; if 23 years industry experience, a thriving contract business, and 5000 Lawn Care Legends Social Media followers are anything to go by!